For an audio version of Unearthing #1 click the SoundCloud bar below: (recorded and edited by Brian Lewis) 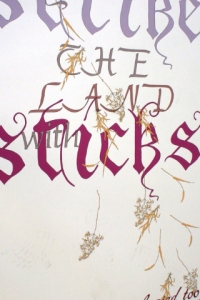 Strike the Land with Sticks (detail of 5ft by 4ft drawing). Emma Bolland 2010

Between June 2006 and autumn 2010, I made virtually no work, and wrote virtually no words. (I cannot even be sure I looked at art, or read a book). A dead time, a chill time, the seeds of ideas rotting in poisoned ground. I don’t like to think of those years, and leave them half forgotten on a dusty shelf. The work I had made in the two years leading up to that dread summer, two rich and lively years, was forgotten too. Blanked, erased, all records (I thought) were lost. When at last my hand and mind linked arms again I found myself creating drawings. Large graphic works of around my own height, the span of their surface both a mirror of my skin, and a ground for my pen to walk upon.

I was preoccupied with the land, with the ground, with the act of walking (and running) upon it, and with those who were lost and buried beneath it. A suite of drawings emerged that obliquely referred to a contested childhood memory, and a recurring childhood dream – the memory of being witness to the scouring of farmland for the body of a missing child, and the dream of tiny infant skulls buried beneath the cesspit at the farm. (The contested memory is referred to in Every Place A Palimpsest – Part Two.) When these works were exhibited in 2011, an ‘in conversation’ event was held where I and the author David Peace discussed the themes and preoccupations we shared in our respective practices.

During our discussions prior to the event, and on the night itself, we returned again and again to the idea of the landscape of erasure, the non-space, places of concealment and forgetting. Those discussions were the starting point for my ongoing collaborative project MilkyWayYouWillHearMeCall, which has at its core, an exploration of memory, place and mourning, and which marks the point at which my work begins to be performed, as well as made. 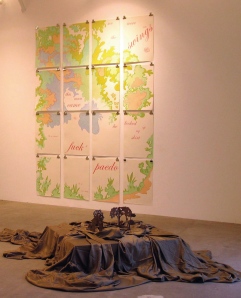 A month ago, when I decided at last to create a blog that exposed my individual practice, to make a space where I could think through, and in the process display and expose both the materiality and the critical and emotional underpinning of my work, I set myself the task of excavation. Files of unnamed and undated images sprawled over two laptops were sorted through, titled, catalogued – laid out and categorised to make sense of, and tell the story of the evolution of my practice. (The story that I choose to tell, that is, for although some of the gaps or twists in this narrative are unavoidable, some are of my own making. After all, we all mythologise ourselves a little). At last, there remained only the mystery of an external hard drive, found dusty on a shelf, resembling nothing so much as a little metal box of a reliquary – a casket of ashes – (like a meteor, its weight defying its size), and inside, two images of a work made in in 2005. ‘Park’, a large composite drawing made with coloured pencil. The work surprised me. (How could I have forgotten the making and the thinking of the piece). Part of the research process for MilkyWayYouWillHearMeCall has been to wander places in the city of Leeds: edgelands, industrial estates, but mostly the municipal and anonymous spaces of public parks and playing fields that have been the sites of atrocities, of tragedies, of violence. There, in ‘Park’, was the ancestry of this process. 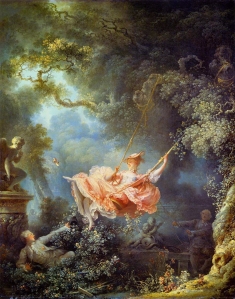 Decorative, ambiguous, the piece takes its starting point from the painting ‘The Swing’ by Jean-Honoré Fragonard (1732 – 1806). Part of The Wallace Collection, the painting is described on their website thus: ‘The Swing is Fragonard’s best-known painting, encapsulating for many the finesse, humour and joie de vivre of the Rococo. No other work better demonstrates his ability to combine erotic licence with a visionary feeling for nature. According to the poet Collé, the history painter Doyen was commissioned by an unnamed ‘gentleman of the Court’ to paint his young mistress on a swing, pushed by a bishop with himself admiring her legs from below. Fragonard, who became well-known for his erotic genre-pictures, proved better suited to paint the work, in which the impudent reference to the church has been omitted, leaving the girl as the main focus, delicious in her froth of pink silk, poised mid-air tantalizingly beyond the reach of both her elderly seated admirer and her excited young lover.’ I saw the picture somewhat differently. A girl, a young girl, (see François Boucher’s painting of King Louis XV of France’s 13 year old mistress Louise O’Murphy, c.1752, to get an idea of just how young these girls were), is playing on a swing, watched by two men, one of whom is positioned so as to see her genitals, the ‘froth of pink silk’ exposed by the rocking, sexualised rhythm of the swing. (I must mention here that I am an admirer of some aspects of the painting traditions of the Rococo and the ‘ancien regime’, particularly the work of Jean-Antoine Watteau 1684-1721, who deals with nothing so much as mortality and the melancholic).

‘Park’ moves the scenario, or rather a problematised version of the scenario to a 21st century playing field, the visual representation of swinging girl replace by the decoratively scripted statement:

‘… we were on the swings, and this man came and looked up my skirt, so we shouted “fuck off paedo”, and he ran away…’

I think, in the end, that the piece is about sadness, and vulnerability – but whether that of the shouter or the shouted at is not clear. Not to me, anyway.

The first view of Park shows it wall hung, spot-lit, in a rather grand and airy white cube space, an imposing, purposeful sort of piece. In the second image it is lain on the floor and becomes a field to walk on; dimly lit, an altogether more fluid and elusive proposition. Sad, tender, wounded. I think I like it better this way.

(Postscript: I am happy to say that I have found Park, its sheets carefully wrapped and stored in a long unopened portfolio. Perhaps it can be shown again).