Next month I will be spending two days working with students on the MFA Art, Society & Publics at the Duncan of Jordanstone College of Art and Design (University of Dundee). When asked by Professor Tracy Mackenna what I would like to do, I initially thought of my own state of not knowing and of being outside of the ‘academy’ as a lack, a negative position from which to teach. But reflecting on my own practice (which is, after all, the reason for my invitation), I (re)recognised that ‘not knowing’, research as being and doing through literal and metaphorical walking and talking (especially in collaboration), and trespassing the boundaries of knowledge and the academy are central to my work. This self-validation (which has shaped the content of my two days in Dundee) coincided with a decision by myself and Brian Lewis to start a collaborative. creative and open-ended process / project (as yet untitled) around a walk that has become significant for us over the last eighteen months. 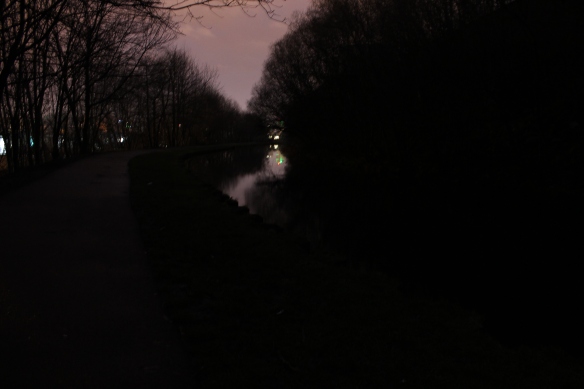 The Leeds to Liverpool canal is the most direct route from Leeds railway station to my house. For the last mile of this journey it seems to occupy a level all of its own: from one bank a steep rise into woods that half conceal an ambiguous industrial space, and from the other an even steeper fall to the River Aire, the metalled churning Id of the canal’s ordered cut. Beyond the river the city rises once more, its lights in hours of darkness a glamour concealing the vain and clumsy builds of the near and avaricious past. The path, the funnel of the walk is both discrete and mutable; a constancy of markers that are always wrought anew.

Brian is my lover and my love, and the canal is part of the journey that takes us from Leeds to Sheffield and back again, from his home to mine. We most often walk it in the early morning or late at night, and it is in these times that our conversations, focused by and separated from the distractions of ordinary space, deal with ideas and creativity and struggle with the possible and future languages of the things we are yet to do. The witchy materiality of the space is a mirror of this process. An unexpected cast of violet light, a grieving factory howl from the blackness of the trees – outside of adequate language they inhabit the sublime.

As a word, sublime is often drained of its potency, misused to describe trite indulgences and pleasures. In Kant‘s account of the sublime, which in its true meaning is an experience, and never an object, ‘not knowing remains an essential component of what he describes as the most intense kind of aesthetic experience, that of the sublime.’ (Jones 2009). In the intervening century and a half the idea of the sublime has been reworked, problematised and enriched by such thinkers as Irigaray, Lyotard and many more, but the importance of the state of ‘not knowing’ has persisted in all of these accounts.

Of course, the canal is not the mountain range or infinite ocean of an orthodox Romantic sublime as exemplified by Caspar David Friedrich. It is a functional construct, not a force of nature; but in some senses it is a Romantic (and romantic) version of the pavement, beneath which is the beach: ‘Sous les pavés, la plage!‘. It is in the walking of it that its materiality becomes infinite and unknowable, in the walking that we are repeatedly surprised by what and how we see. In the decision to make the canal not simply a place for creative thinking, but a subject of creative thinking we have given ourselves no fixed process or outcome (although we have started by making audio and visual recordings): we simply wander / wonder in the changing darks towards the lights. 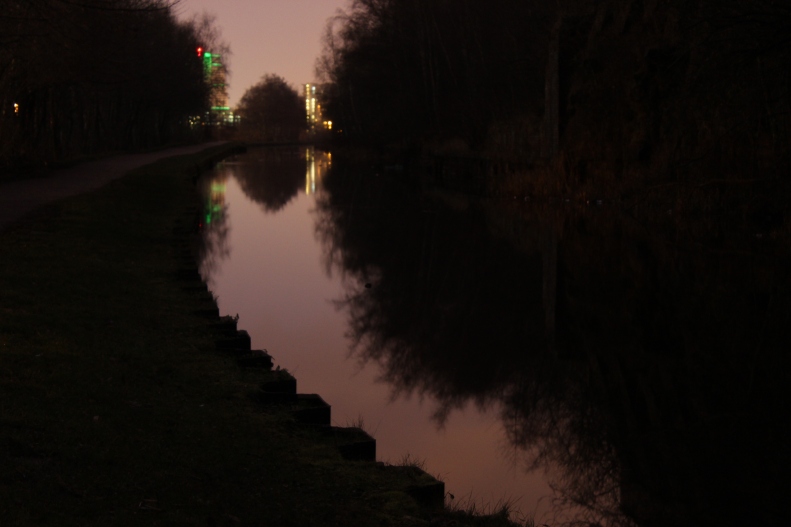 4 thoughts on “The Darks (A possible Part One)”