‘Now I am on the last half-emptied case and it is past midnight. Other thoughts fill me than the ones I am talking about.’ Walter Benjamin 1931 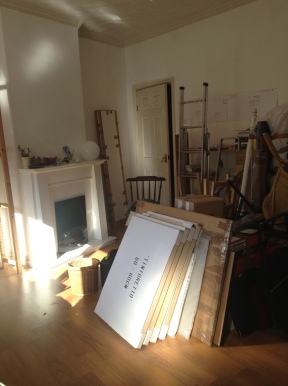 Walter Benjamin, in his essay Unpacking My Library (1931), refers to the ‘spring tide of memories which surges towards any collector as he contemplates his possessions’. The starting point and backdrop for his piece is a move, an upheaval of place, and the implication is that it is at the points of packing and unpacking that we are most caught up in this tide, most carried away by its current. I am moving, part moving, mostly moving from one city to another, my time split evenly between the two; the bricks and mortar of my house is in the old, but the emotional (and, for me, entwined) spaces of ‘home’ and ‘work’ are in the new.

All of us have systems, methodologies and categories, even if they do not seem to follow convention or common sense (as a child, I would arrange the objects in my room by colour – a book with a red cover would sit next to a red cardigan, and not next to another book that happened to be blue or grey), systems that are self-regulating perhaps through their symbiotic relationship with anxiety; but during upheaval, these systems break down. Books must no longer be arranged via the orthodoxies of subject or author, but instead are fitted tetris-like into boxes, and categorised according to a mutable tessellation that aspires towards an economy of space. 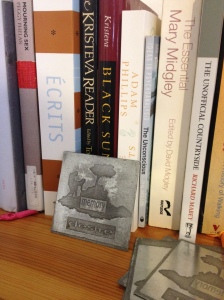 The beginnings of a new system: books and relief etching plates (from the Memory and Desire series – 2010) unpacked and on the studio shelves.

Before the packing, the order of the books upon the shelves, even if seemingly random to the external eye, will be at some unconscious level known to the owner, and as such, a journey through this ‘word hoard’ may tread familiar or directed paths. But in the packing and the unpacking the ‘word hoard’ becomes a word tide: systems become fluid and new relationships and associations are formed in the chaotic pragmatism that is part and parcel of any up-and-re-rooting of work and home. One refiguring of the Hegelian maxim that ‘it is only in Darkness that the owl of Minerva takes flight’ might be that confusion sometimes makes us think. Or to put it another way, a side effect, and affect of necessity, is that we pick up different books.

As an artist, books for me have a substance that goes beyond their text, and they have sneaked their way into my work in many guises. 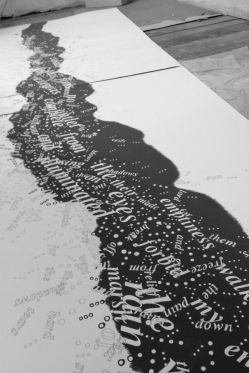 The words are flooding the studio (detail). Ink and gouache on paper. 4ft by 15ft. Emma Bolland. 2012

My ongoing collaboration with the curator Judit Bodor and the artist Tom Rodgers (MilkyWayYouWillHearMeCall) has, as its starting point, a reading and handling of David Peace’s novel ‘1980’, and has manifested its outcomes as photography, drawings and essays and more, with a long-term goal of a book and, perhaps more importantly, a working towards a book – a process which I discussed in the paper Unruly Image, Unruly Text: What Is A Book If It Will Not Be A Book? The works Nightwood and Crimescene employ the materiality of books to both search for systems – the repetition of the be-forested cover designs – and to disrupt them, the intervention of the oil paint ‘flesh tones’ of the classical painting tradition inserting the presence of a different kind of body into the work. Another childhood recollection: being punished for ‘reworking’ the illustrations in The Little Humpbacked Horse, a Russian fairytale poem written by Pyotry Pavlovish Yershov and edited by Pushkin – itself a narrative of transformation. Aged seven, I believe I was driven not by ‘badness’ or a lack of respect for ‘things’, but by the beginnings of a compulsive engagement with books (and our relationships with them), as changeable in both textual and material terms; experiencing the first understandings of the links between creativity, necessity and flux. 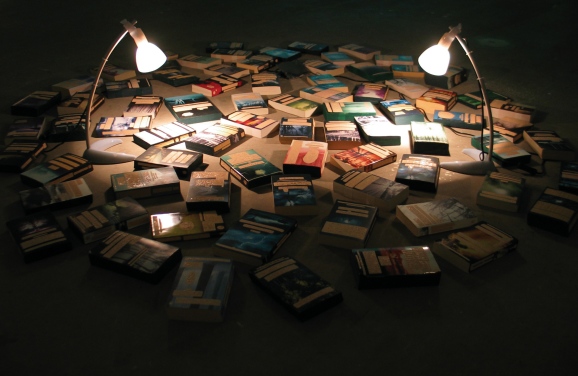 1 thought on “Tides, Texts And Transformations: Unpacking My Library.”