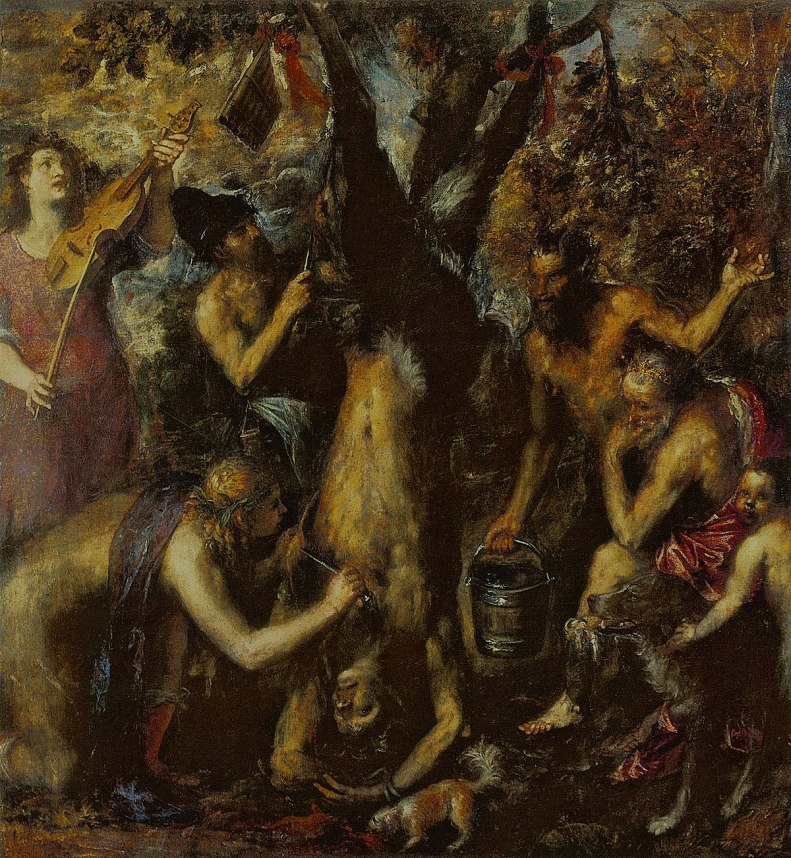 I was reminded, yesterday, of Titian’s The Flaying of Marsyas (c.1570–76) painted when in his eighties, and approaching the end of his life. I saw it just once, almost exactly thirty years ago, but its fluid surface, floating with dark, loose brushstrokes, and reeking with the coppery tones of blood, are preserved fresh and visceral in my mind’s eye. Marsyas is a central figure in several stories of Ancient Greek mythology. A Satyr (half man, half goat), Titian’s painting depicts him in the aftermath of having challenged the god Apollo to a contest of musical virtuosity. The punishment for his pride—in himself, in his abilities—is to be flayed alive.

I think of the parallels drawn between skin and ego, skin and self, skin and the sense of a stable whole, a state of resilience in which one is ‘comfortable in one’s own skin’. (Can those who are comfortable remember being not; can those who are not imagine such comfort?) I think of the skin of an animal, the skin we call hide, that we ‘toughen up’, make leathery through the process of tanning, and of the manufacture of belts and shoes and the buckskin coats and trousers that allow for endurance and ‘riding out’. I think of the metaphors for the formalisation of the chastisement of children; the threats and enactment of punishment: to give them ‘a good hiding’, to ‘tan their hides’. I think of the assumptions made by those with thick skins that those of us with‘thin skins could have a thick skin if only we tried, and the disregarding of the possibility that we have tried, that the work of a lifetime has made it thicker than it once was, even if others still deem it too thin. I wonder if those who tell us to toughen up know that each time they say it they scrape a little more of our skin away. (I think ‘fuck you’, in fact.)

As a Satyr, Marsyas is positioned as half human and half animal, half skin and half hide, and Titian’s painting shows him strung up by his pelted hind quarters, a shadowy blade working the hairless skin of his torso until it hangs in ribbons from his body. I remember all this and wonder about the delusion, the fantasy that beyond the temporal frame of the painting, he might somehow gather up those slippery strips and literally ‘buck-up’; the fantasy that after the knife he might have the choice to ‘pull himself together’, to re-wrap his body, and grow a different skin.